Matt: Does Pickup Advice work this 2021? We’re joined by Dr. Robert Glover and he’s going to drop a ton of knowledge on you today, including whether pickup advice is good or bad, whether it actually hurts you or harms you. Whether it can really get you a hot girlfriend or not.

And should you use that old cliche, “fake it till you make it”?

DOES PICKUP ADVICE WORK THIS 2021?

Matt: We’re going to even talk about why you shouldn’t date a hot woman. Sounds pretty crazy if you ask me, but let’s dive right in.

Josiah: Hey, Robert, I’d like to backtrack to something you said a minute ago, and I really love your term “geeks with techniques.” So when you got out and exited your second marriage and you’re starting to date again, tell us your journey – because for me personally, it was like I found the seduction community and I basically I’m pro “fake it till you make it,” because that’s the path that I took.

Now, had I had other options that might have been I might have done something different. But at the time, that’s all I had. So how is it for you and what’s your thoughts on fake it till you make it?

Robert: Yeah, OK, there’s about four questions there. Let me see if I can kind of parse them apart. You know, there’s no right way to do this. There’s really not. Now, my book, Dating Essentials for Men, I call it the “UN-Pickup Guide to Dating Success.” and I have mixed feelings about traditional pick up. 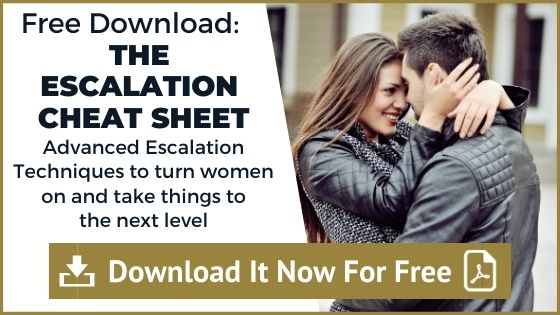 When I became single, that was when pick up was just really beginning to explode. So, you know, like everybody else, I read the game, you know, got all of David D’Angelo’s dating stuff. What happened is all my clients that I was working with in my private practice, they started giving me stuff, books, DVDs.

I was really kind of before, like, YouTube was so big, but there’s a lot of resources out there. I read the game and listened to some podcast interviews and and then end up getting interviewed by David D’Angelo and ended up getting interviewed by a lot of the people that I listen to. There’s a lot of good information out
there, a lot of good psychological information that works in terms of interaction with the opposite sex.

And my issue with pickup is in the way that it is taught. Now, here’s here’s one thing I’ve also noticed about pickups. I’ve been able to watch it for twenty years.

Most pickup artists evolve over time and kind of get to where like, you know, it really is about being authentic and, you know, and the relationship aspect of it. Even Neil Strauss wrote the Bible of Pickup to then write another book that still looks like a Bible called The Truth and it was all about finding the right relationship. Most of the guys were teaching pick up when I first got single have evolved more into a social dynamic aspect of things – how to be authentic, how to be real, how to move your energy, how to be grounded, how to be embodied, how to set the tone and lead.. All things that I think are really positive.

The parts of that that I don’t like about pickup is that I believe fundamentally where much of his time, I think is demeaning to both men and women.

But there must be some benefit. So what is that benefit? In my mind is primarily egoic, its the man going, “Look at me, I’m not such a loser! I got a hot woman. All the guys are going to think I’m great!” And we think it’s going to lead to amazing sex, we think because that’s male logic. If she’s hot, she must be great in bed. In my personal experience and I’ve talked with a lot of guys, I’ve talked to a lot of women. Often the hottest women have been the most abused. Plus they’ve never had to show up in any way. They’re usually the least accountable, the most entitled and the worst in bed.

Because guys, we’re physical, we’re visual. We want that hot woman. And it’ll make me feel like I’m OK. I think it’s demeaning to us and demeaning to them. It breaks most women down to just accumulation of body parts, you know, the ones with the best genetic inheritance?

All right. That’s the one I got to get because then it teaches how to pick up the most attractive woman in the room and go walk up and talk to her. I think that’s fundamentally invasive. The approach I teach is that if you’re just in a space being yourself and you notice the feminine noticing you. Go talk, go approach, go do something, But just approaching a woman because you like her ass or you like her tits, I tell men I think it’s the worst possible reason to approach a woman.

WANT US TO COACH AND MENTOR YOU? APPLY FOR OUR ELITE PROGRAMS HERE

You know nothing about her. Guys who say, “Well, but she looks nice.” No, don’t stop lying to yourself. You like her tits, you like her ass. You think those tits will make your life better in some way. That’s really what it is. And it keeps us in a really almost seven year old view of women.

“Oh, they have nice tits. They’re going to make my life better.” I don’t think there’s a God damn thingwrong with those being physically attracted to women. Like, physically attracted to their body parts. I don’t preach against it, but using that as our basis for deciding who we talk to and don’t talk to or who we want to go out with or don’t want to go out with is the worst.

I’ve been doing relationship counseling for over 30 years. I just think it’s the worst possible foundation to build anything long term with. And as I said, contrary to guy logic, it’s also usually the worst possible way to have a good time in bed.

I rather we only go back to helping men be their authentic selves, learning to soothe their anxiety, learn how to get out of their comfort zones, learning to challenge themselves, learning to walk through the open doors that present themselves. If you’re standing next to a woman in line at Starbucks and you just start a conversation
and there’s a mutual interest there. Yeah, get a phone number.

If you’re somewhere at a party with a group of friends, you notice a woman’s looked at you a couple of times, walk across the room and talk to her, but just don’t be invasive because you like a woman’s tits. There’s a reason why hashtag MeToo was so prominent. Women have been invaded by men all of their lives. And so I don’t want to perpetuate that.

BUT I do want to teach men how to walk through every open door of opportunity. And that’s why I’ll bring it back to what my experience was. That’s what amazed me. As I said, I didn’t and I couldn’t believe what planet I had landed on. Women were propositioning me.. They were giving me phone numbers. They were getting naked on first and second dates. And I’m going, what’s happening here? I didn’t realize it worked like this.

You guys began by asking how old I am. I’m sixty four. My wife is twenty two years younger than me. We’re coming up on four years of marriage and she’s a fairly typical Latina in that she she has that Latina jealousy. And she’s actually is good at noticing women noticing me, women walking in front of me, women bending over, kind of pointing their butt at me, or giving a little cleavage, women touching my shoulder as they walk by.

She’s highly sensitive to that and lets me know it. That even at sixty four, I still draw that kind of energetic attention without me trying. I actually I know how to attract and engage with women. I keep it toned down because I’m married. I don’t want the attention or energy and it still keeps coming to me.

I’m a big believer that we don’t have to learn some some poll question or clever pick up line and walk across the room and find the hottest woman and try to, get her phone number and go, “Yey! I got a number.”

You know, she never calls you back and you ever see her naked, but you got her. No, I never had to resort to that. And again, it wasn’t because I was the best looking guy in the room. There are more effective ways to draw the higher quality women into your life than than using the tricks that pickup teaches.

I’m actually a really big fan of that process, both of getting a tribe, connecting with men and getting out of your comfort zone. I do like that dynamic that that typically occurs in a dating boot camp or something like that.

Matt: Yeah, I think part of the problem, too, is they’re still nice guys and pick up just give them some lines and some things to do or say to look cool and sound cool. But underneath it all, they’re still nice guys. They still have all these issues and baggage and trauma’s that they haven’t dealt with yet, so it’s just a bandaid over the real problem and eventually, usually sooner rather than later,the woman figures it out. “He’s really not as cool he seems.“

Robert: And the bottom line, they’re not being themselves. The social dynamic should be that they’re learning is really about being their most bold, assertive self. I love that idea. But if it was about just being phony in a way that gets drunk, twenty two year old women with lots of insecurities to give you a phone number, what have you really gained?

And then as you said, and then if the woman gets to know you and all of a sudden you still have these really underlying fears of “I’m not very interesting, I don’t have anything to talk about, I’m just going to try to give her everything she wants and try to make her happy.” They’ll soon get bored with all that anyway.

Matt: And then if you even if you do sleep with her, then it could give you a false sense of confidence, like you feel great for a little while because you just slept with this gorgeous woman. But that’s not going to last very long because it’s not real confidence.

CLICK HERE TO APPLY FOR OUR COACHING AND TRAINING PROGRAMS

How to gain COURAGE to APPROACH WOMEN in DIFFICULT SITUATIONS.
What to Do During Quarantine | 5 Things You Should DO!
Signs You’re a NICE GUY That Women Don’t Respect
Best Pick Up Lines That Never Get Rejected
8 Ways To Attract Women in 2021
The Best First Text to Send a Girl
0 replies

8 Ways To Attract Women in 2021 The BEST Way To Recover FAST From A Rejection (w/ Dr. Robert Glover)
Scroll to top
Go to mobile version